E-Tangata raises the voice of Māori and Pasifika storytellers

Journalist Gary Wilson was at primary school when he first became aware of racism.

”Living near Pukekohe, inevitably, us three Wilson kids were familiar with much of what made life unfair and soul destroying for Māori,” he says.

Gary, 85, has spent most of his life in journalism encouraging Māori and Pasifika writers into the media and fighting institutional racism. With Samoan journalist Tapu Misa, whom he introduced to the craft as a tutor 42 years ago, he co-edits the influential online magazine E-Tangata, dedicated to Māori and Pasifika stories, commentary and analysis. Since its launch in 2014, E-Tangata has grown in reach and mana, and given around 200 Māori and Pasifika storytellers the chance to be heard. But there’s room for plenty of growth yet, they believe.

”I want us to be bigger and better so we can have greater reach and more influence — and so E-Tangata is sustainable past me and Gary,” says Tapu.

”We have a lot of highly talented, skilled, clever people around us that we can tap into, but most of them have day jobs or other demands on their time.

She and writer and broadcaster Stacey Morrison (Te Arawa, Ngāi Tahu) co-chair the charitable Mana Trust, which oversees E-Tangata, and number among their fellow trustees singer/songwriter and broadcaster Moana Maniapoto (Ngāti Tūwharetoa, Tūhourangi, Ngāti Pikiao) and broadcaster Dale Husband (Ngāti Maru). “They’re all at the top of their game and in very high demand in their respective fields and beyond. That’s how it is for Māori and Pacific Islanders at this level,” notes Tapu.

She and Gary may appear something of an odd couple, but Gary says they’re “sort of twins”. Tapu says shunning the spotlight is one of several things they have in common: “Neither of us likes attention, and neither of us has a social media profile, which isn’t helpful in promoting our cause in the media.” 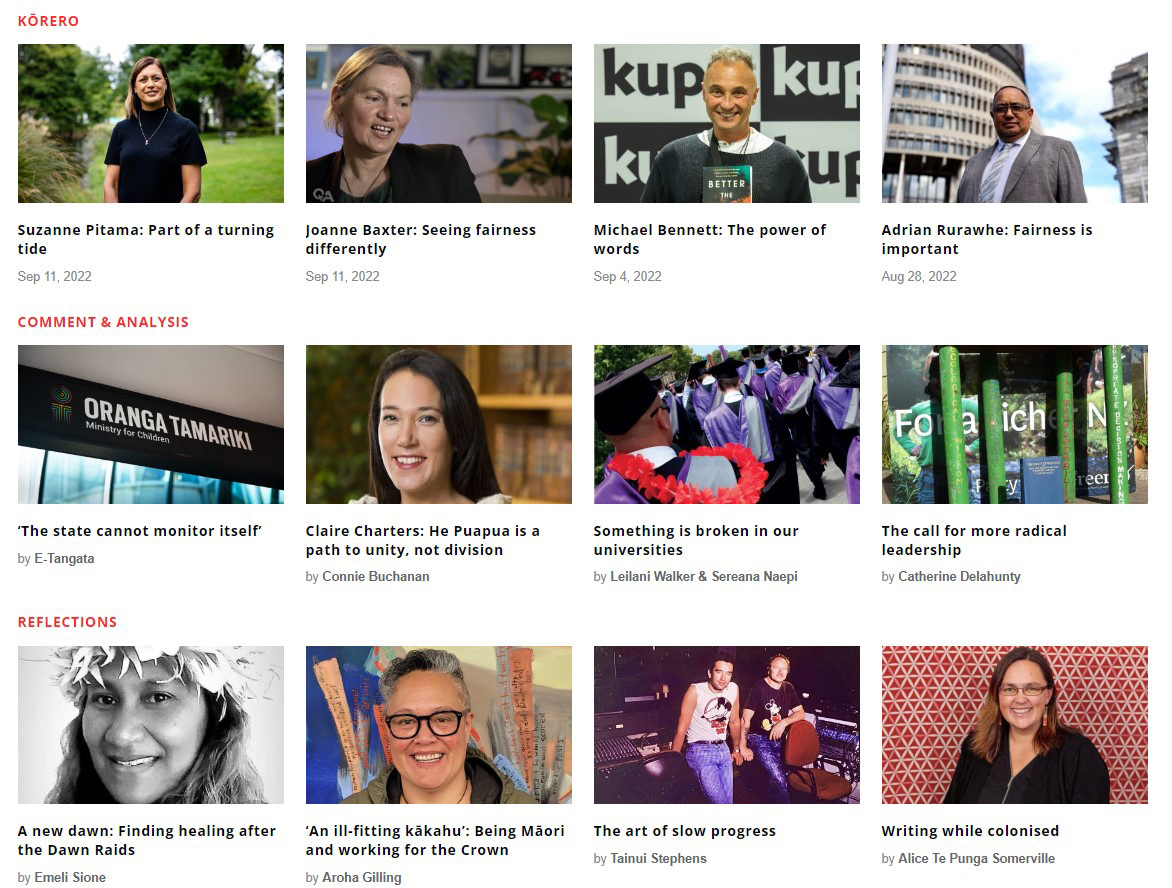 Nonetheless E-Tangata, through the quality of its content, is getting plenty of attention anyway, with conversations launched on the site seeping through to the mainstream media. “There are definite signs that we are read by people in policy development, education, law and in other media, and our readers are more likely to have post-graduate qualifications,” says Tapu. “Certainly, there are some Sundays when most of our offerings have been written by people with PhDs.”

It’s not simply preaching to the converted, she says. “I used to think it was okay for us not to be read by everyone, that maybe we just needed to be read by those who could effect change. But the last few years in particular have shown us how important it is to try to take as many people as we can with us.

“Change can be driven by an informed and motivated elite, but only up to a point. You just need to look at the debates over Three Waters and co-governance. You need to influence the general populace to make real, lasting progress. If you’re not talking to ordinary people, or at least trying to, other players are going to fill the vacuum.”

Both editors put in up to 60-hour weeks on the magazine, with Gary unpaid and Tapu taking a minimal wage. The small team of staffers receives $10,000–$12,000 a month in Press Patron donations, and were able to recruit two journalists thanks to the Public Interest Journalism Fund. The Tindall Foundation has supported E-Tangata since its inception, and backed the Mana Trust before that.

Annette Culpan, Special Projects Manager for The Tindall Foundation, is in awe of the team’s commitment and passion: “I’ve got a real sense of this being their life’s work.” And, she says, it’s a vital role, helping to fulfil TTF’s commitment to developing strong and diverse communities: “Growing the voices and perspectives of Māori and Pasifika within Aotearoa/New Zealand is hugely important.”